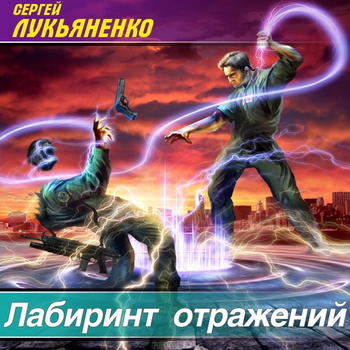 Labyrinth of Reflections (Лабиринт отражений, Labirint otrazheniy) is a Cyberpunk trilogy written by the popular Russian sci-fi author Sergey Lukyanenko. It is set in an Alternate History where, in the early days of the Internet, a Russian hacker accidentally created a hypnotic pattern that forces human brain to perceive crude 3D computer images as a full-blown virtual reality. As his discovery spread to the public, major computer companies (Microsoft, IBM, etc.) created a Cyberspace colloquially known as "the Deep" that exists alongside the Internet (which has lost much of its appeal, with most social and business functions taking place in the Deep; the only reason people get on the Internet is to find out factual information).
Advertisement:

Within a few years, a large virtual city has sprung up in cyberspace called Deeptown, where people can live and work for real money. After all, why should companies pay for office space when all they have to do is pay for virtual space and hire some graphics designers to make crude virtual offices that look awesome to the hypnosis-affected brains? Anyone who works in Deeptown usually does it from home while wearing a full-body virtual suit that allows one to better experience the physical sensations of the Deep. However, a suit is not strictly necessary, as the first person to experience the effect of the hypnotic pattern did so while playing Doom late at work and actually felt like it was him running through those Martian corridors fighting snarling monsters and unable to escape the illusion until he beat the whole game in one sitting.

Since humans are not normally able to break through the illusion in order to return to the real world, certain exit points have to be set up that allow the subconsciousness to "leave" the Deep. These points also act as "save" spots, as the user then returns to the same place after logging back in. There is a small group of humans known as Divers who are able to force themselves out of the illusion and have the natural ability to see programming holes and backdoors as, well, holes and doors and use them. They are usually free agents, although some are employed full-time by major corporations as security experts. Divers are also frequently hired to help a person stuck in an illusion to break free, as some people forget to set an exit timer and can easily die of dehydration or exhaustion (in the psychosis-induced state, people don't perceive their physical body, are not aware of any pain, and don't feel hungry or thirsty). The Divers have created a Code that governs their interactions. First and foremost, all Divers have a right to privacy. Also, no Diver shall use his or her abilities to harm another Diver. Violations of the Code are punished by fellow Divers.

The trilogy consists of two novels and a short story:

The protagonist of the two novels is a freelance Russian Diver named Leonid who lives in a rundown apartment in St. Petersburg. He is an experienced Diver but doesn't know much about computers, which forces him to frequently rely on his hacker friend Alexander, a.k.a. Maniac. After breaking into a pharmaceutical company's virtual research lab and stealing their latest product for a competitor, Leonid is approached by someone he calls Man Without a Face (the man's face is constantly obscured), who offers him a job of rescuing a man trapped in a MMO game based on Doom. As a reward, Leonid will be given the Order of Permissiveness, a unique pass that allows him to enter any location in the Deep and requires anyone to let him in. During his adventures, Leonid meets Vicka, a virtual prostitute (who also runs the virtual brothel as an experiment for her psychology dissertation) and begins to fall for her. Leonid manages to reach "Jinx" (as the trapped man is nicknamed by other Divers) and finds out that he is not what he appears. By the end, everyone is after Jinx, and Leonid and Vicka are desperately fighting to keep him safe. The novel has been translated and published in English nearly 20 years after it was written.

In the second novel, several years have passed, and Deeptown has changed. Divers are no longer needed, as mandatory 24-hour timers have been programmed into all computers, and the Divers have lost the ability to see programming holes and backdoors. Leonid works as a virtual furniture mover, and his marriage to Vicka has hit a rough patch. To top it off, Leonid is suffering from Deep Psychosis, a condition that makes him unsure if something is real or not and may even involve hallucinations when he's not in the Deep. Then an old friend of his is killed by a virtual weapon (something previously thought impossible), and Leonid gathers the old gang (and some new friends) to find the answer and to defeat the mysterious Dark Diver. Once again, this involves playing Labyrinth of Death, although the game has since been updated to make it even more challenging. Additionally, there are rumors that the Deeptown may soon give birth to a true AI.

The short story is told from the viewpoint of a young woman who works for the Russian Department of Justice. She is sent to investigate a virtual prison run by the Russian government and discovers that it is being used to run secret experiments on the inmates. Leonid does not appear in the story and is only briefly mentioned twice by two other characters. The short story was originally posted online by the author and actually features two endings. The short story is usually included in the book of the second novel along with both endings.

The trilogy contains examples of the following tropes: