In Space, Everyone Can See Your Face 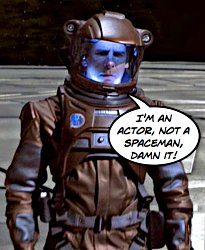 In media depicting characters in environments requiring protective helmets, such as space or underwater, those helmets will be equipped with lights that illuminate the wearer's face. If you did this in real life, the wearer would most likely find that all they can see is their face reflected in the glass.

A variation, seen in the few science-fiction media that make some attempt at scientific accuracy, is to avoid the lights, but also omit the highly reflective metallic coating applied to the visors of real spacesuits. (It should be noted, though, that the reflective visors on real spacesuits are often retracted when not looking in the direction of the Sun.) Such scenes would often require contrived lighting. Then again, "contrived lighting" has been a staple of filmmaking for ages.

Of course, the reason for this is that the makers want us to see the faces of the actors filling those helmets. A lot of body language and emotional cues are carried through facial expressions and reactions, so it helps the audience to be able to see the people in question while they chew the scenery. The same reasoning pops up in reverse in Faceless Goons, where faces are obscured in order to avoid humanising the characters.

Obviously, this is not a problem in literature, since there are no expensive actors or camera scenes involved at all.

This trope is probably related to the fact that pretty much all spacecraft are evenly illuminated from all sides, regardless of their distance from a star or the possibility of being shadowed by a planet or a bigger ship or whatever. Presumably they all have little lights attached to their outer hull for the same purpose as the helmet lights, though it isn't like there is any Stealth in Space anyway.

Another possible explanation that is sometimes covered is that the internal illumination is due to reflections from lit instrumentation or Heads-Up Displays that that are hidden from external view. In such cases, it is believable that the inside of the visor also has anti-reflective coatings.

Related to Helmets Are Hardly Heroic.

To summarize: In space, nobody can see your face, unless precautions are taken.