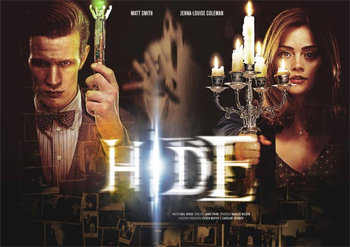 Well, it's been a while. Time for another not-ghost story!
"I am the Doctor — and I am afraid."
— The Doctor
Advertisement:

The one that scares the Doctor so bad he has to take off his bowtie to breathe easier.

The first episode written by Promoted Fanboy Neil Cross, although his second episode, "The Rings of Akhaten", was aired earlier.

Clara and the Doctor arrive in the 1970s at Caliburn House, a haunted mansion alone on a desolate moor. Within its walls, ghost hunter (and ex-spy) Professor Palmer and gifted psychic Emma are searching for the Witch of the Well. Her apparition appears throughout the history of the building. The Doctor runs a Bavarian Fire Drill and takes charge of the ghost hunting, while Clara wonders why on Earth Palmer would buy a haunted house in the first place.

The Doctor and Clara investigate, encountering rather scary noises and feelings and words on the wall all over the house. When the Doctor and Palmer spend a few minutes alone to develop their new photographs of the ghost, Palmer explains that as a soldier, he killed people to protect his own country. Although he's proud of his actions, it's very difficult to live after seeing so much death, and he's closed himself off to becoming emotionally involved. Meanwhile, Emma, The Empath, has quite a bit of blatant Unresolved Sexual Tension with Palmer, which everyone picks up on but no one does anything about.

Clara realises that the ghost has the exact same pose in each picture, so the Doctor merrily heads back to the TARDIS, digs up his old orange spacesuit and takes a few pictures all across Earth's timeline to see what time period the ghost's appearances span. Clara quite seriously freaks out at seeing the entire lifespan of her planet flash before her on the control room screen. She calls the Doctor out, telling him that all humans must be nothing more than ghosts to him — from his perspective, she hasn't even been born yet, and at the same time she's already dead, as are all humans. He gently tells her that that's not quite the case, but doesn't elaborate.

Because the ghost appears in all of Earth's history, the Doctor knows what she must be: a time traveller trapped in a Year Outside, Hour Inside pocket dimension. Using a mind-enhancing crystal from Metebelis III, a part of his TARDIS' Eye of Harmony and Emma's natural empathic link with the ghost, he opens a portal to said dimension and jumps right in to go fetch the woman. Fortunately, although she's very frightened, he's able to convince her to run, and she ends up in the regular universe. Unfortunately, the portal is closed because Emma is utterly exhausted — and the Doctor is trapped.

Clara tries to follow him in the TARDIS, but the TARDIS still just doesn't like her. The two get into a rather splendid snarking match before the TARDIS relents and forcibly vworps herself and Clara over to the pocket universe, even though it might kill her within seconds. The Doctor is saved from the claws of the monster. In the aftermath, he explains that Emma and Palmer are the ancestors of the time traveler (named Hila), which is why Emma's link with her was so strong. Hila knows that history says she went missing, so she decides to stay behind and live with her great-great-great-grandparents. Also, the Doctor asks Emma what she can feel when she looks at Clara... and the answer is that Clara is a perfectly ordinary young girl.

Happy with having saved the day, the Doctor leaves Emma and Palmer to come to terms with the idea of becoming a couple... when he suddenly remembers a number of things that just don't make sense yet. He has a sudden "Eureka!" Moment when he realises that there's a second monster in the house... just looking for its mate. He reunites the two by doing the whole dimension-jumping all over again, with the help of Emma, Clara, and the TARDIS.