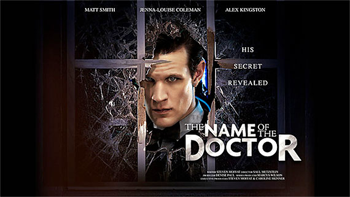 "What is your name?"
"Welcome to the final resting place of the cruel tyrant. Of the slaughterer of the ten billion and the vessel of the final darkness. Welcome to the tomb of the Doctor!"
— The Great Intelligence
Advertisement:

The one that permanently broke the numbering system.

Prequel: "She Said, He Said". Clara and the Doctor tell the viewer about how mysterious they find one another, and how they discovered one another's true identity when they went to the fields of Trenzalore... Watch it on YouTube

Clara's scattered across time and space, from Gallifrey to Earth, seeing the Doctor — all Doctors — move around her. She confronts the First Doctor and Susan when they're about to steal the TARDIS, spots the Sixth while he walks past her, tries to get the attention of the Third as he's driving by in Bessie, follows the Fourth as he's walking through corridors on Gallifrey, rushes after the Second while he's having an adventure with the Eighth, watches the Fifth as he's trapped inside the Matrix, tries to rescue the Seventh while he's dangling from a cliff on Ice World, the Tenth Doctor in the Library, and confronts the Eleventh when he's temporarily retiring in 19th century London. None of them, except the First and the Eleventh, ever properly notice her.

Madame Vastra, Jenny and Strax (who's spending the weekend in Glasgow because... he just really likes Glasgow) arrange a dreamscape séance across space and time, conferring about the danger the Doctor is in — something is intruding into his reality and will require the secret he'd take to his grave, on the fields of Trenzalore. Also attending the "conference" are Clara (summoned to the dreamscape through a soporific-coated letter sent many years before her time by Vastra) and River Song. More precisely, River Song's Virtual Ghost, still living on as a fragment of memory in the Library. As Clara and River meet for the first time, Jenny realises with horror that she left the door open back in reality, and promptly gets herself almost killed by the once again assumed physical body of the Great Intelligence (still Richard E. Grant!) and his legion of "Whispermen".

Clara breaks free of the trance and finds the Doctor stumbling blindfolded through her house, trying to babysit Angie and Artie, who have in fact tricked him and gone to the cinema. As soon as she mentions the séance and Trenzalore, the Doctor properly breaks down and begins to silently cry. He explains that the Exact Words meant that it's not his secret that is at Trenzalore, but his grave. The TARDIS is just as reluctant as the Doctor is to go there, and with good reason: not just because it's really bad for the web of time to do that sort of thing, but also because it's her grave as well. The TARDIS is so reluctant to go to Trenzalore that she tries to blow herself up to avoid landing there. The Doctor shuts her down completely and forces her to fall down onto the planet... the fall of the Eleventh.

The TARDIS' future self stands as a giant atop the catacombs, Not Quite Dead, with her dimensional transcendence having spilled out to her exterior. The fields of Trenzalore have merged with her body and show her memories as gravestones, and her tunnels reach down far underneath the ground. River, who's kept her psychic connection to Clara from the séance open, joins them there as a spectre — appearing real to Clara, but unseen by the Doctor.

As Clara and the Doctor navigate through the underground catacombs, she quite violently remembers the Doctor telling her how she dies, twice. The Doctor notes that it's really not the appropriate moment to have that conversation, especially since she shouldn't even logically have memories of it. Once they reach the centre of the tomb, the Great Intelligence is waiting for them, along with Vastra, Strax and Jenny (who was saved from the brink of death by Strax).

The Great Intelligence reveals that Trenzalore is where the Doctor died, during a minor skirmish that was nothing compared to any of his other battles — but it was enough to finally kill him permanently. Both the Great Intelligence and the Doctor know that only his name can open the tomb, but the Doctor refuses to say it, even when the Whispermen are about to murder his friends. It's River who does eventually say it, unheard by anyone. The tomb opens and reveals the Doctor's corpse in the very core of the decaying TARDIS — a mass of light representing every scar the Doctor ever left in the web of time with his travels. The Great Intelligence steps inside it, and begins to work his way through the Doctor's life, erasing the Doctor's actions throughout time and space. Soon enough, the stars start going out. Jenny vanishes (to Vastra's great distress) since she was never saved by the Doctor, and Strax, who never bettered his life, becomes a more unhinged Sontaran than we've seen, and begins to attack Vastra, forcing her to vaporize him. Clara realizes what she has to do in order to save reality and follows the Great Intelligence inside, scattering herself across time and space along with him. Everywhere the Great Intelligence tried to stop the Doctor, a reborn version of Clara would be there, native to that time period, to preserve the timeline. Like River, she'd be nothing more than a copy, but she'd have a chance to keep reality safe.

Jenny and Strax are restored almost immediately, and the stars come back on cue, but the Doctor can't cope well with losing his companion. He confronts River (whom he can see just fine — he could always see her just fine). River asks him why he never sought her out after he preserved her memory at the Library, and he explains that it would simply hurt him too much. After a tremendously Big Damn Kiss instigated by the Doctor for once (since nobody else in this room could see River, God knows how that looked), the Doctor finally, for the first time, bids River a proper goodbye. Not a farewell, just a goodbye. He jumps into his own mess of tangled time scars after Clara.

Clara's going absolutely insane from seeing all Doctors run around her in the surreal, barren mindscape in which her final "real" consciousness ends up. The Doctor rushes towards her and clings to her, and all is well again...

Until they see the unbelievable: there is another individual among the previous ten Doctors that have been seen in action. Unlike the rest of the echoes of the Doctor, this one is standing eerily still, with his body cloaked in shadows and his head slouched downward in a position of regret. And the Doctor is terrified of him.

The Doctor tries to urge Clara to leave his timestream and not question the origins of the figure in front of them, desperately masking that person's identity. But she's already seen the one thing no one should have ever had access to inside the Doctor's memories. His biggest secret isn't his name, it's him (played by Sir John Hurt). A incarnation who committed an act so horrifying, he had to give up the name of "the Doctor".

INTRODUCING JOHN HURT
AS THE DOCTOR