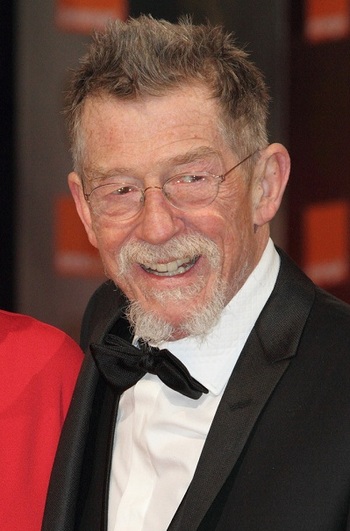 "Pretending to be other people is my game and that to me is the essence of the whole business of acting."
Advertisement:

Sir John Vincent Hurt CBE (22 January 1940 – 25 January 2017) was an English actor, who initially came to prominence for his role as Richard Rich in the 1966 film A Man for All Seasons, and sustained a career in lead and supporting roles in many popular motion pictures.

Hurt was one of England's best-known, most prolific and sought-after actors, and had a versatile film career spanning five decades. He was also known for his many Shakespearean roles, and oddly closed the circle on some special ones. For instance, he played Winston, the tyrannized subject of Big Brother in 1984 in 1984, and played Sutler, the Big Brother-like dictator in V for Vendetta. He also famously voiced several characters in works inspired by Richard Adams' novels - one of his most famous animated voice roles was the heroic rabbit leader, Hazel, in the film adaptation of Watership Down, but he also played the primary villain, the tyrannical General Woundwort, in the later television adaptation of the same novel. He also voiced Snitter in the film adaptation of The Plague Dogs, by the same author.

Hurt received multiple awards and honours throughout his career including four BAFTA Awards (For The Naked Civil Servant, Midnight Express and The Elephant Man, as well as a Lifetime Achievement Award) and a Golden Globe, as well as two Academy Award nominations (for the latter two films). His character's demise in Alien is generally regarded as one of the most memorable scenes in cinematic history. He even reprised the role in the sci-fi spoof Spaceballs, directed by The Elephant Man producer Mel Brooks.

Hurt starred in a voice part in the Warhammer 40,000 CG-animated movie Ultramarines, and also appeared on Doctor Who as the War Doctor, a Shell-Shocked Veteran who shed the name "Doctor" and became a warrior.

He received a knighthood in the 2015's New Year's Honor List, a honor that was no doubt long overdue.

In June of 2015, he was diagnosed with pancreatic cancer, but said he was optimistic about treatment and that the disease would not interfere with his professional duties. It did, however, cause production of Terry Gilliam's The Man Who Killed Don Quixote to be delayed since nobody was willing to insure the film while Hurt had cancer (he was eventually replaced by Jonathan Pryce). He eventually passed away on January 25, 2017, three days after his 77th birthday. The news of his death was announced two days later.

An amusing story was told by Paul Higgins (Jamie MacDonald from The Thick of It). On the opening night of Black Watch, a play Higgins was in, Hurt was sitting in the front row. One character had the line: "I don't care who plays me in the movie, so long as it's not that cunt in The Elephant Man." The next day, the production got a card: "Congratulations on a magnificent performance of a very important play - from the cunt in The Elephant Man and his wife."

A Chronically Killed Actor, a YouTube compilation of his death scenes

is even longer than it is for Sean Bean. He was also at drama school with Ian McShane, and they shared an apartment, leading to a lifelong friendship.

Not to be confused with Mississippi John Hurt

. And no, he's not related to William Hurt.

Example of:
Death by Cameo