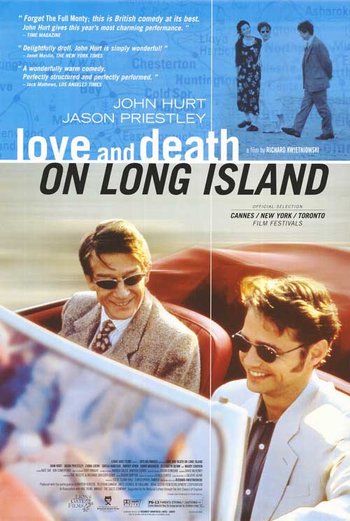 A 1990 novel by Gilbert Adair, giving a modern and humorous update on Thomas Mann's Death in Venice. The narrator, Giles De'Ath, is a middle-aged novelist from a wealthy family who's so cut off from pop culture that he's never even heard of home video. But one day he stumbles into a cinema playing a tacky teen sex comedy and falls for one of its actors, a Teen Idol named Ronnie Bostock. Giles becomes obsessed, to the point of tracking down Ronnie at his home on Long Island to try to break up his engagement.
Advertisement:

In 1997, the novel was adapted into a film starring John Hurt, Jason Priestley, and Fiona Loewi.

Love and Death on Long Island contains examples of: