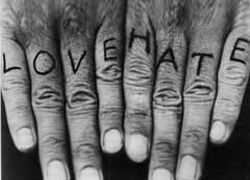 "Ah, little lad, you're staring at my fingers. Would you like me to tell you the little story of right-hand/left-hand? The story of good and evil? H-A-T-E! It was with this left hand that old brother Cain struck the blow that laid his brother low. L-O-V-E! You see these fingers, dear hearts? These fingers has veins that run straight to the soul of man. The right hand, friends, the hand of love. Now watch, and I'll show you the story of life. Those fingers, dear hearts, is always a-warring and a-tugging, one agin t'other. Now watch 'em! Old brother left hand, left hand he's a fighting, and it looks like love's a goner. But wait a minute! Hot dog, love's a winning! Yessirree! It's love that's won, and old left hand hate is down for the count!"
— Preacher Harry Powell, The Night of the Hunter
Advertisement:

Fingers. You've got four on each hand, plus thumbs. And the knuckles make a pretty good place to leave a tattoo. Ideally, a four-letter word. Maybe a second one on the other hand.

Typical to the Tattooed Crook, as tattoos are an Evolving Trope, and simple shoulder tattoos have gone mainstream.

And no, a tattoo of Knuckles doesn't count (unless it's on the literal knuckles).