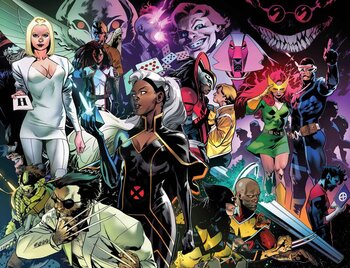 After the dawn comes the reign.
Advertisement:

Dawn of X is a relaunch of the X-Men line of comics, following the House of X and Powers of X storylines from Jonathan Hickman's X-Men. The line sees the X-Men franchise move into a new era, established in the aforementioned titles. Jonathan Hickman will write the flagship title of the relaunch and serve as the overall architect, with all creative teams handpicked by him and working with his supervision.