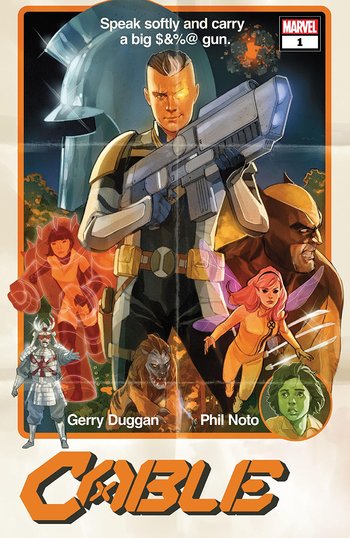 Speak softly and carry a big $&%@ gun.
Cable is a 2020 comic book series, and the fourth volume of the title starring the titular character. It is part of the Dawn of X relaunch, and is written by Gerry Duggan (Marauders) and drawn by Phil Noto (Star Wars: Chewbacca, Star Wars: Poe Dameron). Unlike previous series, this volume stars the "Kid Cable" incarnation introduced in Extermination.
Advertisement:

Following his time briefly working with Psylocke and X-23 in Fallen Angels (2019), Cable has gone solo and is living life as the chosen son of the Grey-Summers clan. After a brief sparring session with Wolverine (in which Nate cheats to claim victory), Nathan responds to a young mutants' distress call regarding an injured creature roaming Krakoa. Nate, Pixie and Armor fight the monster, leading the telekinetic teen to see a piece of metal sticking out of its paw. Pulling it free, Nate realizes that it is a sword belonging to one of the Space Knights. Hoping to disassociate himself from the old Cable, Nate decides he's a sword guy now. Unfortunately, there are plenty of people wanting that sword too...

The book ended with Issue 12.