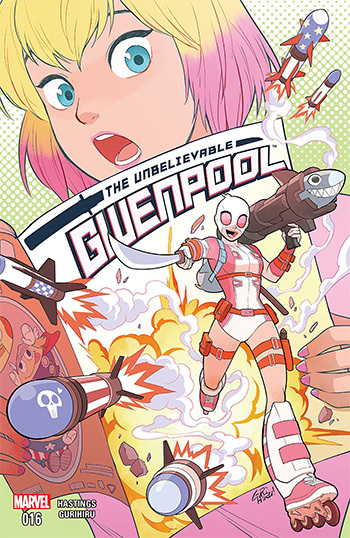 "A while ago I left the real world. I successfully traveled to the very weird space between realities, and emerged here. The comic book land of super heroes! And it was fun! I killed a bunch of rando fictional characters and got paid well for it. I knew the only way to survive in a place like this was to become a main character myself."
— Gwen Poole

You like Spider-Gwen, you love Deadpool, so what could be better than these two together! No, not a team up, as the same person (except not really)!

Meet Gwendolyn Poole. She's from another universe, one where superheroes and space aliens exist only in the pages of comic books. A lifelong fan of Marvel's larger-than-life heroes, she one day finds herself in the streets of New York City on Earth-616, staring in awe as characters she grew up reading about rush past her to battle evil.

Starting life in a series of What If? variant covers with Gwen Stacy as various heroesnote Kicked off by the unexpected popularity of Spider-Gwen, Gwen dressed as Deadpool became so incredibly popular, especially among cosplayers, that she got a backup story in a Howard the Duck comic (later republished as Unbelievable Gwenpool #0). Then a Christmas special. And finally her own ongoing series in the All-New, All-Different Marvel lineup: The Unbelievable Gwenpool written by Christopher Hastings (The Adventures of Dr. McNinja), with art by the duo known as Gurihiru. This series served to give her a backstory which divorced her from her "Gwen Stacy Deadpool" origins and flesh her out into a proper character.

Alas, while the series had its fans, it ended on its twenty fifth issue. The character herself went on to be part of the short-lived Marvel: A Fresh Start version of West Coast Avengers (2018 — 2019). This was then followed by a five-issue limited series called Gwenpool Strikes Back, wherein Gwen attempts to gain actual superpowers that can justify her continued existence in the Marvel universe.

The Unbelievable Gwenpool provides examples of: