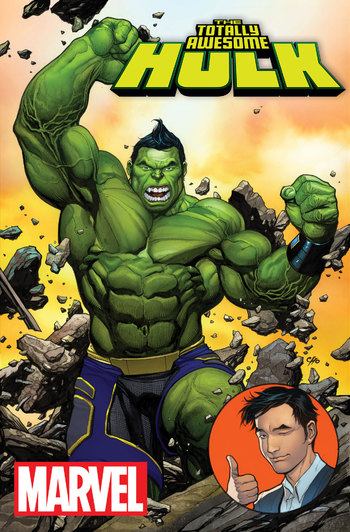 Totally Awesome Hulk is a 2015 Marvel Comics series, featuring Amadeus Cho taking on the role of his favorite hero, the Incredible Hulk. It is part of the All-New, All-Different Marvel initiative.

After Bruce Banner suffers an accident involving large quantities of radiation, Amadeus Cho finds a way to create his own Hulk Out and become a new Hulk. Unlike Banner, however, Cho loves the power that comes with his transformation and can also stay lucid and intelligent afterward. This leads to the events of the series, in which he becomes an adventurer on call to help with emergencies too large for puny humans. He's backed by his sister Maddie (mentioned but never seen during a previous The Incredible Hercules run).

As part of the Marvel Legacy initiative, the title was rechristened into Incredible Hulk and given the Legacy numbering of #709.