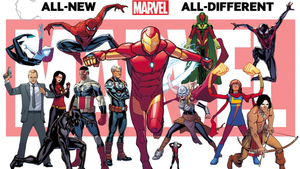 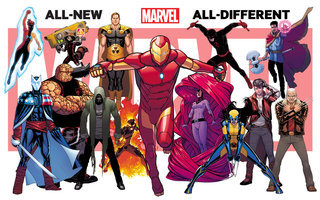 All-New, All-Different Marvel (abbreviated ANADM) was the 2015 relaunch of the Marvel Universe, following the events of their massive Secret Wars event earlier that year. Much like Marvel NOW!, their 2012 rebranding, this new initiative was not a reboot — more of a deck reshuffling than anything else.

ANADM picks up where Secret Wars left off with an eight-month Time Skip, much like the one that preceded it during The Avengers (Jonathan Hickman). Dubbed "Eight Months After," the start of ANADM sees characters adjusting to their new lives after the fall of Battleworld with very different status quos, i.e. the Fantastic Four scattered, shakeups to the X-Men, brand new Avenger teams formed, and more. Needless to say, the Marvel Universe is starting to look all-new and all-different.

In 2016, Marvel returned to the Marvel NOW! branding, effectively supplanting ANADM as the new status quo of the Marvel Universe.