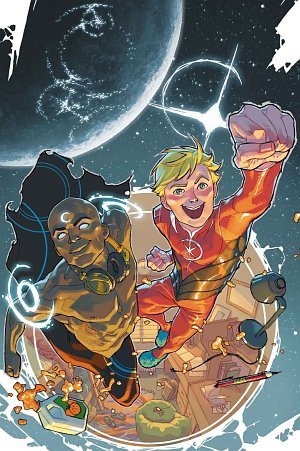 Starbrand & Nightmask was a 2015 comic book series launched as part of the All-New, All-Different Marvel relaunch, written by Greg Weisman with artwork by Domo Stanton, and lasting for six issues. It featured two characters created by Jonathan Hickman during his Avengers run, that were reimaginings of Star Brand and Nightmask from The New Universe.

In The Avengers, Kevin Conner was a completely ordinary college student who was also friendless, socially awkward, and mostly ignored, before getting accidentally granted the power of the Star Brand Planetary Defense System during a White Event in a way that went horribly wrong and destroyed his college and everyone in it. Adam, meanwhile, was an Artificial Human intended to be the first member of a new human race and given the powers of the Nightmask so he could serve as a herald and mentor to the bearer of the Star Brand. The two went on a variety of cosmic adventures with the Avengers before being seemingly killed while fighting the Beyonders in a futile attempt to postpone the destruction of the multiverse that led to Secret Wars (2015).

Post-Secret Wars the two have somehow ended up as alive again, and have been travelling known space and superheroing for the past eight months. But Adam is growing worried about Kevin, as Kevin's cosmic adventures and experiences with his god-like powers are causing someone who started out having a hard time connecting with humanity to begin with to become even more detached from his fellow beings. Since Kevin is supposed to be a Planetary Defense System for Earth, Adam views this growing detachment from the people he's designated to defend as a serious problem.

Adam's solution to this? Time for Eternity's Children to attend college. But it turns out the cosmos might have other plans for them...