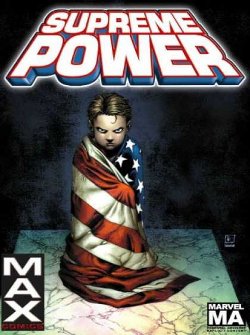 "You will never be alone."
"UBI DUBIUM, IBI LIBERTAS (LATIN) WHERE THERE IS DOUBT, THERE IS FREEDOM."
Advertisement:

Okay, stop us if you've heard this one before: On a quiet night, a Midwestern couple drives through a cornfield. Suddenly, from up in the sky, a rocket falls to earth and crashes. Inside is a lone child. The couple takes it home to raise him as their own. Shortly afterward a team of government operatives shows up to take the child, as they could tell that the object that fell to Earth was a ship and have quickly tracked down the couple in question. After some debate, it is decided to study the child and the technology from his ship, and turn both into weapons serving the United States.

Guess you haven't heard this one, after all. Siegel, Shuster, take a break, J. Michael Straczynski's calling the shots here.

So begins Supreme Power, Marvel's Ultimate Universe version of The Avengers foes, the Squadron Sinister and their later heroic counterparts the Squadron Supreme, themselves originally an Alternate Company Equivalent's of Justice League of America from the DC Universe. It's better than it sounds, as it's pretty much one giant What If? story, with the premise of "What if The Government raised Superman?" In the greater Marvel multiverse, this world is "Earth-31916", in comparison to the original Squadron Supreme comics taking place on "Earth-712".

Mark Milton (alias Hyperion, Marvel's main pastiche of Superman if you will) is sent to Earth by an unknown race and is taken into custody by the United States government. Mark is raised in a controlled environment, and every stimulus and lesson is fabricated to teach Mark to be the ultimate patriot. However, the conditioning is surface deep at best.

At the same time he is growing up, Kyle Richmond (Nighthawk), Stanley Stewart (The Blur), Joseph Ledger (Doc Spectrum), Princess Zarda and the Amphibian begin to enter the world stage as Superheroes all of which are less than ideal versions of their DC counterparts, and range from sellouts, to certifiably insane, to downright racist in their actions, if not worse.

The stories are printed on Marvel's MAX imprint (basically the R-rated segment of Marvel Comics) and do not shy away from gore, destruction, and violence. At the height of its publication, it was considered one of Marvel's better comic book lines (being released during the same era as the mainstream love affair with Crisis Crossovers and the infamous One More Day, many saw it as Marvel returning to its spiritual roots of being an answer to DC's use of comic book tropes).

Executive Meddling would later have Straczynski off the book and forced a new creative team to relaunch the series with a new storyline and new characters that look a lot like properties already owned by Marvel. After this incarnation, the franchise appeared ruined. But a brief mini was released in 2011 that appeared to try to take a back-to-basics approach, hearkening to the original run of Supreme Power (returning to the MAX imprint, a return to being Bloodier and Gorier and more realistic story) but with the initial story focusing mainly on Hyperion and Doc Spectrum.

During The Avengers (Jonathan Hickman), the entire Supreme Power-Earth was destroyed by the villainous Cabal, but not before brutally slaughtering its entire population, including the Squadron. After Secret Wars, Nighthawk was mysteriously revived and transported into the restored Marvel Universe, forming a new Squadron Supreme with fellow exiled members from dead universes. He also starred in a short-lived solo series, but was later killed during Secret Empire, quickly succeeded as Nighthawk by his associate Tilda Johnson, AKA the former Deadly Nightshade.