Above Good and Evil 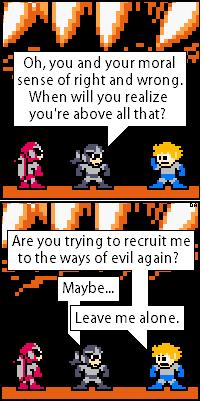 "The man who is to be great is the one who can be the most solitary, the most hidden, the most deviant, the man beyond good and evil, lord of his virtues, a man lavishly endowed with will — this is precisely what greatness is to be called: it is able to be as much a totality as something multi-faceted, as wide as it is full."
— Friedrich Nietzsche

A character declares that they or their objectives should not be hindered by considerations about good and evil. Such "meaningless, fallacious false dichotomies" are for simple-minded beings, not for them. They often term them antiquated or childish propaganda, and may go on to question What Is Evil? This trope usually applies to villains, though very occasionally a hero may say 'screw right and wrong, I'm doing what I want.'

Associated with The Übermensch and the Straw Nihilist, along with any other things Nietzsche-related. Other people who can claim this trope includes particularly megalomaniacal narcissists with delusions of godhood, sociopaths, scientists who do not let moral-societal opinions interfere with their quest for empirical knowledge, superpowerful beings corrupted by power, or just someone with Blue-and-Orange Morality. It can be a sign of an Eldritch Abomination and such creatures beyond standard human morality, thus very common in a Cosmic Horror Story and narratives where Nature Is Not Nice.

The exact objectives of this character differ widely. Sometimes it is power, other times knowledge, or in the case of the Übermensch, his own values to replace traditional morality. In some cases their willingness to do anything to get there is absolute though some Ubermenschen may have a set of standards apart from the usual good/evil that they go by. In the case of darker villains holding to this philosophy expect them to suffer from Laser-Guided Karma. When suffering payback, the character rarely excuses the wrong done to them under the same principle.

Compare The Unfettered. Villains whose strong point is not logic will sometimes use both tropes. Not Cheating Unless You Get Caught is a related concept, but it's more practical than philosophical.

Not to be confused with the book Beyond Good and Evil by Friedrich Nietzsche note While he did speak of going "beyond good and evil", his conception of what that meant is quite different from what we usually see; to put it quite bluntly, the way "beyond good and evil" has been taken in wider culture is at best The Theme Park Version. or the unrelated game of the same name.