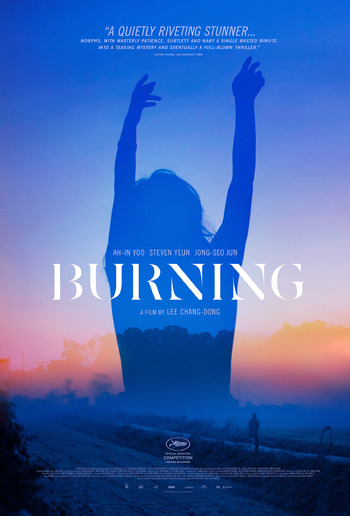 "To me... the world is a mystery."
"Sometimes I burn down greenhouses. I choose an abandoned greenhouse and set it on fire. You can make it disappear... as if it never existed."
— Ben
Advertisement:

Burning is a 2018 South Korean drama by Lee Chang-dong. It is based on the short story "Barn Burning" (1983) by Haruki Murakami. Which is itself inspired by the short story by William Faulkner.

Lee Jong-su is a young man who does small jobs and wants to be a writer. One day he meets up with Shin Hae-mi, a young woman from the same countryside town where he grew up. They have dinner, he accepts to feed her cat during her incoming vacation in Africa, and they have sex in her apartment. He grows fond of her.

When she comes back from Africa, she has met a new friend named Ben (Steven Yeun). He is quite wealthy and is mysterious about what he does for a living. She hangs out with him a lot, while Lee Jong-su has left the city to take care of his father's farm. One day they visit him at the farm, and Ben tells him about his secret hobby: he burns greenhouses.

Lee Jong-su worries about the greenhouses around his farm, and gets into the habit of visiting them, possibly in the hope of catching Ben when he attempts to burn one. Then one day, Shin Hae-mi disappears.

"There is no right or wrong... just the morals of nature."