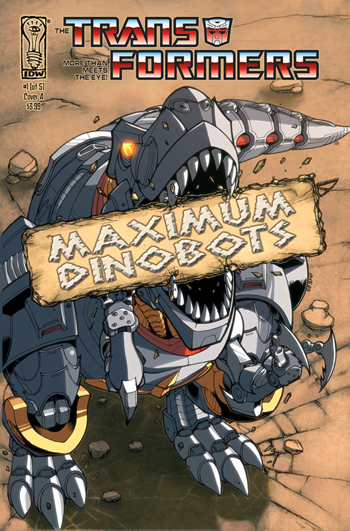 A series by Simon Furman with art by Nick Roche and James Raiz. After the IDW-verse got a reboot in the form of The Transformers: All Hail Megatron, Mr. Furman had to tie up some remaining Plot points from his run, especially after having to cram so much into Revelation.

Cue this series which finishes those plots. Scorponok had landed on earth sometime ago and set up a human company called the Machination empire, which he used to further the technology of the planet, and make himself stronger. He captured Hunter O'nion and Sunstreaker and forcibly turned them into the first headmaster, cloning the later. He places Sunstreaker's consciousness in Hunter, and installs robotic organs and armor into him, allowing him to transform into a head. This hybrid of man and machine grabs a clone body and escapes. Meanwhile, Soundwave was trapped in Vehicle mode by Bludgeon's acolytes in his spotlight, and Shockwave was trapped on earth during his spotlight. Shockwave, Laserbeak and Ravage are all captured by Skywatch, a government organization devoted to finding and stopping transformers. Laserbeak and Ravage escape to find Soundwave, who was sold at a pawnshop in tape mode. Finally, the titular Dinobots, trapped on earth in stasis by Grimlock's actions, Grimlock escaped in his spotlight to cause trouble and is hunted by Scorponok, while Scorponok schemes to have the other Dynobots hunt him down. These events lead up to this series.