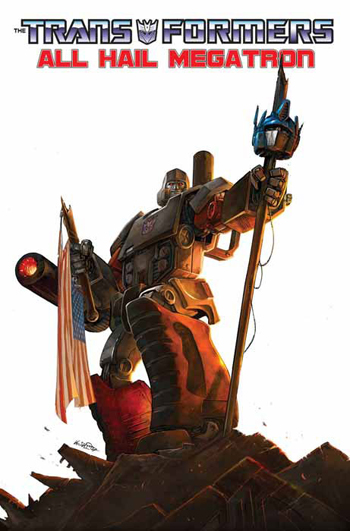 "Decepticons! The humans have had their chance, now... tear them apart!"
— Megatron
Advertisement:

The Transformers: All Hail Megatron is the overarching title of a widely-promoted event in the IDW Comics Generation 1 universe in 2008–9.

The event spans the 12-issue All Hail Megatron maxi-series, a 4 issue "Coda" (appended to the main series for publication) and various Spotlight-series tie-ins. A standalone sketchbook and preview comic, "Focus on Decepticons", may be considered "All Hail Megatron #0".

The first twelve issues were written by Shane McCarthy and take place on an Earth under Decepticon control.

If you think I'm — that is — mankind is just going to accept you, you've got another think coming.
You brought your war here. Your kind, good or bad, caused all of this.
Any chance of a union between humans and your kind? It's long gone.