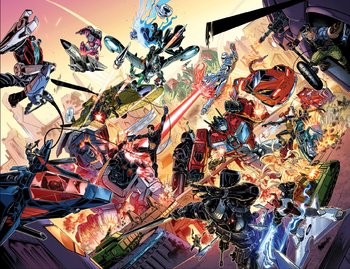 It's time to come together.
"The world just keeps getting stranger."
"That's not a bad thing, Matt. It just means we'll always have something to do."
— Matt Trakker and Scarlett
Advertisement:

What do you get when you cross the likes of Transformers and G.I. Joe, but instead of giving them to the guy behind American Barbarian, you throw in Action Man, ROM, Micronauts, and M.A.S.K.? Odds are you'll wind up with Revolution.

Revolution is IDW Publishing's first step into taking all of the Hasbro properties it has (well, almost all of them) and having them set in the same universe.

After current Action Man, Ian Noble, witnesses an explosion of Mt. Olympus caused by Ore-13, a vital substance to the Cybertronians, the word gets through to the U.S. Government, who after putting up with so many of the Transformers' recent shenanigans, decide to resurrect the organization known as G.I. Joe to combat the Transformers once and for all. However, the Transformers and the Autobot leader Optimus Prime find out about the Mt. Olympus explosion themselves and agree that they had nothing to do with it. That said, Optimus is quick to deduce that the humans will think the incident was their doing and roll out into action themselves.

Meanwhile, the Space Knight known as ROM is still hard at work destroying his longtime enemy, the Dire Wraiths. However, when his mission collides with the conflict between the Joes and the Cybertronians, the result proves to be... catastrophic. Not only that, but a Ragtag Bunch of Misfits from Microspace (a subatomic realm) dubbed the Micronauts are drawn into the conflict too, as is their enemy Baron Karza...

And for the record, this miniseries has absolutely nothing to do with the similarly-named live-action TV series Revolution.

This miniseries contains examples of these tropes: