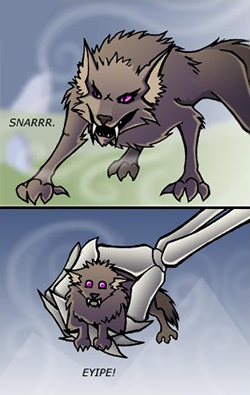 Who's afraid of the bigger, badder wolf?
"'Monster' is a relative term. To a canary, a cat is a monster. We’re just used to being the cat."
— Dr. Henry Wu, Jurassic World
Advertisement:

Pursued by a Big Bad Wolf? Wait till' the Bigger Badder Wolf comes in.

Our heroes are cornered or trapped by one scary thing or group, only to be saved by another, bigger, scarier thing or group. Sometimes the "savior" has been introduced earlier in the plot, making this an instance of Chekhov's Gunman.

If the "savior" was previously the main antagonist, this may set up an unusual reaction in the viewer, who notes how his feelings about that antagonist are changed in this scene. The characters may notice the same; they may say, "I never thought I'd be so happy to see you!".

In this case, the "savior" isn't actively trying to save the protagonists. He's just there, and hungry, and the heroes had best not be there once it finishes its present meal.

May result when the hero asking "Why Isn't It Attacking?" has the bigger fish behind him.

It is commonly used as a Deus ex Machina, unless (as noted above) it is set up in advance. See also Colliding Criminal Conspiracies when the "Bigger Fish" arrives early and threatens heroes and villains equally.

Compare to Always Someone Better, Save the Villain, Did You Just Punch Out Cthulhu?, Exit, Pursued by a Bear, Self-Disposing Villain, Eviler Than Thou, and The Worf Effect (in which the "big fish" character keeps encountering bigger fish). If invoked, see Summon Bigger Fish. If it's a videogame, and you have to also fight the bigger fish, it's a Bait-and-Switch Boss. For actual bigger fish (and other things), see Sea Monster. If someone thinks they're scaring off an antagonist and it's really because there's a bigger fish around that they can't see, then that's Scared of What's Behind You. (That version is usually Played for Laughs.) See also Cub Cues Protective Parent where the hero is the "middle" fish.