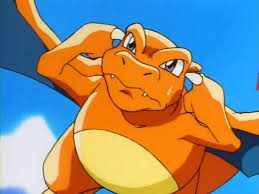 Is Charizard trying to ignore Jigglypuff, or Ash?

Ash and company have reached the Grampa Canyon on their travels, which conveniently has lots of explorers searching for fossils the exact day they arrive. Prompted by Gary's appearance at the canyon, Ash decides to search for his own fossils, but things go astray when Team Rocket present their scheme to blow up the canyon and steal all of the fossils. Eventually the canyon does blow up and Ash, Pikachu and Team Rocket get stuck underground with all of the fossil Pokémon.

The fossil Pokémon fight back against the new intruders, and things eventually go from bad to worse when an Aerodactyl joins in with the fun. Ash gets captured by the angry Pokémon but his Charmeleon manages to fight back when it evolves into Charizard. Jigglypuff eventually arrives and puts all the Pokémon to sleep, saving Ash but forever trapping Aerodactyl and the other Pokémon yet again. Ash manages to find a rare Pokémon egg, and then the journey continues.