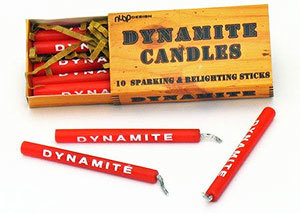 They bring some light, alright.
Twitchy: [looks in the back of a mine cart] Hey lookie, I found this box of candles! A big box!
The Wolf: A box of candles? Light 'em up!
[Twitchy holds up what is clearly a stick of dynamite with a sparkling fuse]
The Wolf: Wow that's nice and bright. What kind of candles are those?
Twitchy: [looks at the word "DYNAMITE" on the side] Uh, DEE-NA-MEE-TAY. Hmm, must be Italian.
The Wolf: [gasps] Lose the candle!
— Hoodwinked!
Advertisement:

A character is in a dark area and manages to grab something candle-like and lights it. As he looks around his surroundings, he doesn't notice he actually lit a stick of dynamite! And the room he is in contains a lot more dynamite!

Alternatively, it can be when a birthday cake has dynamite instead of candles.