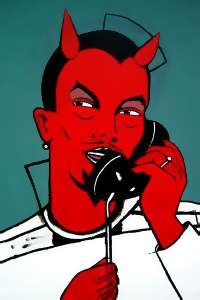 Trust me, eternal torment would be wearing those shoes with those pants.
Image

Want to demonstrate that your villain is undeniably evil but also has a flair for the (melo)dramatic or a knack for classically decadent self-indulgence? Make him a Flaming Devil!

Simply put, the Flaming Devil is a representation of Satan or any other demon with Camp Gay characteristics. Often but not always a villain or a demonstrable Depraved Homosexual, he's effeminate and at least prone to misbehaving, if not outright wicked.

The origins of this trope are Older Than Steam. Epicene depictions of Satan date back to the Middle Ages, in which folklore often described the Devil and his minions as having Ambiguous Genders and tempting men sexually. The homosexual implications in Christopher Marlowe's Doctor Faustus and overtly bisexual Mephistopheles in Johann Wolfgang von Goethe's Faust eventually codified the image of a gleefully evil and flamboyantly effeminate devil.

If Satan wins, he gets Kyle all to himself.

If Satan wins, he gets Kyle all to himself.