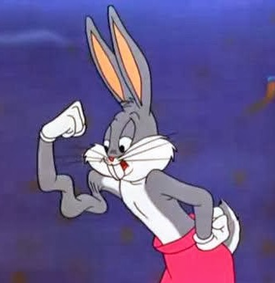 It's hard to imagine how he's even standing.
Crow: So, so what do you think? Am I buff or what? Am I blue twisted cold rolled steel or what?
Mike: You're sure you've lifted already, you're not planning to lift at some future date or anything, are you?
— Mystery Science Theater 3000 on Space Mutiny
Advertisement:

An image of a person flexing the biceps, but with the muscular bulge missing. Sometimes this is a comedy act, in which the flexer seems incredibly proud of their (apparently non-existent) muscles, or else hopeful that the muscles will miraculously appear, only to be dismayed. In cartoons, the upper arm may actually droop when the subject flexes, in a U shape, and swing back and forth like a hammock.

Otherwise, the bicep pose is used as a symbol of strength, achievement, and victory, just without the direct connection to muscular strength. The more symbolic use goes back as far as Rosie the Riveter, if not further, and is often found in advertisements aimed at women and children.

The main rule is that the person has to be flexing, and that the biceps brachii is not developed enough to show a bulge. If there is any bulge, then it doesn't count as an example of this trope.

And for the record, in modern English usage, "biceps" is both the singular and plural form. note The proper plural form of the Latin adjective "biceps" is "bicipites", but nobody says that these days.