Western Animation / The Nine Lives of Fritz the Cat 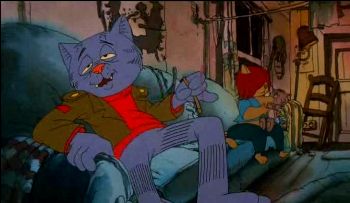 Fritz neglects his wife and child. Our hero, ladies and gentlemen.
Advertisement:

The movie Fritz the Cat, an adaptation of a popular character created by underground cartoonist Robert Crumb was really successful, both commercially and critically, even though it had quite a lot of things going against it, including a first-time film director, Crumb himself hating the adaptation to the point where he retired the character soon afterwards, and the fact that it was given an X rating by the MPAA. The film's producer, Steve Krantz, decided to produce a sequel. However, since original director Ralph Bakshi wanted nothing to do with this sequel, directorial duties were given to Robert Taylor, an animator who was working on some of Bakshi's other films.

The results, as you might have gathered, might be mixed. This one doesn't have as much of a coherent storyline as the first, instead taking a kind of Anthology Film approach in which the title character is killed off in various different ways, in what is probably a reference to the comic strip, in which he was given an icepick to the back of the head by a psychotic ex-girlfriend.note Something that Robert Crumb actually did because his hatred of the first film made him vow never to use the character again. Whether this actually works or not can be left in the eye of the beholder, but most viewers agree that the music score by Tom Scott & The L.A. Express is pretty badass. Also, it was the first animated movie to compete in the Cannes Film Festival.