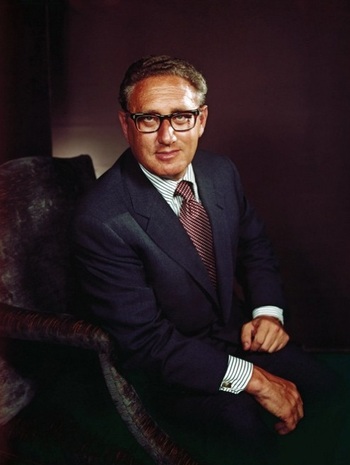 Henry Alfred Kissinger (born Heinz Alfred Kissinger, May 27, 1923 in Fürth, Germany) is a German-born American politician, diplomat, and geopolitical consultant who served as US Secretary of State and National Security advisor under Richard Nixon and Gerald Ford.

Kissinger was born to a Jewish family in Fürth (the neighboring city of Nuremberg of the infamous Triumph of the Will rallies) during the Weimar Republic and had to flee the country of his birth as a teenager, leaving in 1938 (the year of the infamous November 9th pogrom). Kissinger himself has repeatedly denied that his childhood experiences had any influence in shaping his views on politics nor the career track he would eventually choose.

He became a naturalized US citizen at age 20 in 1943. Joining the US Army upon the outbreak of World War II Kissinger was quickly recognized as useful due to his fluent German and his intelligence and put in charge of various intelligence and later administrative tasks. After the war was over, Kissinger started an academic career writing a doctoral thesis that covered Metternich among other things — Metternich has often been compared to Kissinger in both competence, pragmatism and ruthless pursuance of My Country, Right or Wrong as the supreme goal of foreign policy. While Kissinger had good relations with members of both parties during his years in academia, he gravitated towards the "liberal" Rockefellerite wing of the Republican party by the early 1960s, backing his (failed) presidential bids. When he joined the Nixon administration upon the victory of Richard Nixon in the 1968 election it came as a surprise to many, given that Nixon was seen — especially in foreign policy — as much more of an ideologue than Kissinger.

However, both Nixon and Kissinger thought very highly of their own foreign policy competence and one of Kissinger's main assets during his time in the White House was his adeptness of convincing Nixon to trust him despite Nixon's virulent antisemitism (as evidenced by several unprintable antisemitic rants of Nixon captured on the Watergate tapes). Nixon and Kissinger formed something of an Odd Couple, Nixon the upstart "Used Cars Salesman" type who could never help but look awkward on the big stage and never quite felt "at home" on the world stage - and Kissinger the smooth talking intellectual with top notch university education who could charm the pants off half the ladies (or so he thought) and foreign policy wins off half the diplomats (or so he thought). However, they both had a penchant for secret "backchannel" diplomacy - whether acting as an intermediary between two sides that wouldn't talk to each other ("shuttle diplomacy" called that because it often involved flying back and forth quite a bit) - or all kinds of regime change CIA-type shenanigans, to include coups d'etat, only half of which have been officially acknowledged either way - and most of which are still classified.

Kissinger has been a highly controversial figure as long as he's been in the public eye. During his time he was considered a media darling due to his role in negotiating détente with the USSR and China, close relationships with the Washington press corps and improbable reputation as a ladies' man (more on that below). That said, he was also blamed for Nixon's hardline policies on Vietnam which caused many to brand him a war criminal, along with his policies in Bangladesh, Chile and elsewhere. He was one of Nixon's few close aides to emerge from the Watergate scandal relatively unscathed, even though investigators discovered that Kissinger had personally ordered wiretaps on his own staff in 1969.note Some historians also argue that Kissinger's enraged reaction to the release of the Pentagon Papers stoked Nixon's paranoia about leaks, which contributed substantially to the creation of the Plumbers and the overall atmosphere that culminated in Watergate, even if Kissinger himself had no direct role in the break-in or cover-up. He has remained highly respected among foreign policy wonks (particularly those who share his "realist" approach which can be summarized as Silly Rabbit, Idealism Is for Kids! applied to foreign policy) since leaving office at the end of the Gerald Ford administration, leftists have hated his breathing guts ever since - some even calling for his arrest on account of things that he may or may not have ordered which may or may not qualify as war crimes.

While Germany had a chancellor with a very similar last name a bit before Kissinger came to prominence (Kurt Georg Kiesinger with the last name pronounced the German way with a "hard g"), Kissinger's connection to Germany is hardly ever acknowledged either by him or by most Germans. He is, however, an avid fan of his hometown Association Football team SpVgg Fürth and has on occasion attended games of this team even after he had come to political fame.

He was married to Ann Fleischer, currently married to Nancy Maginnes and has two children with Fleischer. In between marriages he was also known for having a relationship with actress Jill St. John; as Kissinger's date, St. John was once invited to a summit at the White House attended by Soviet leader Leonid Brezhnev, resulting in a famous photo of Brezhnev checking out St. John

Kissinger is largely remembered today for his work, along with Nixon, in establishing diplomatic relations with China in the 1970's and his détente policies towards the Soviet Union. However, due to his involvement with The Vietnam War (especially the bombing of Cambodia), coups in Latin America (Chile in particular) and the Watergate scandal, it is highly advised to keep edits on this page civil.