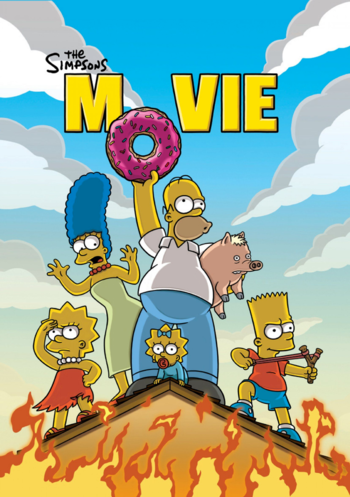 "I can't believe we're paying to see something we get on TV for free. If you ask me, everyone in this theater is a giant sucker! Especially YOU!"
— Homer Simpson, in all his lampshade-hanging/fourth-wall-breaking glory.
Advertisement:

The Simpsons Movie is a 2007 theatrical film adaptation of, well, The Simpsons. Production was famously stuck in Development Hell for most of the series' run, with the film having been commissioned around 2001 and movie plans going back as far as the episode "Kamp Krusty" in 1992.

When Lisa's efforts to clean up Lake Springfield are ruined by Homer's reckless idiocy, it really comes to bite him in the behind when the entire town becomes entangled in the plot of the power-hungry Environmental Protection Agency director Russ Cargill who is hell-bent on saving the world from pollution.

Example of:
Taking Over the Town