Disney Creatures of the Farce 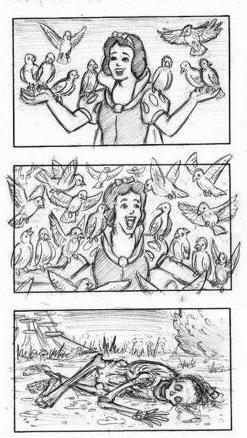 Someday her prince will come...

and give her a proper burial.
Walt Disney movies are known for including a character (often the heroine) who is a Friend to All Living Things, which always leads to a signature scene where the sweet woodland critters mobilize under her command to help out with the chores. Sometimes it's just a few birds chirping a sweet song to make her smile while she's working; other times the whole group turns up en masse to celebrate a particularly happy moment. The music for the scene will be light and whimsical, and if the heroine sings, the animals will join in too.
Advertisement:

When you see a Stock Parody of such a moment, it's this trope.

Writers, particularly in Western Animation, like to throw this kind of parody in for the fairly obvious reason that most of them grew up idolizing Disney movies and either are completely disillusioned now or want to poke a little fun at their first inspiration. But this trope, like the original, can show up in live-action film and television as well, since Disney's influence is quite far-reaching.

The parodic scene will generally start the same way as described above and then take a sharp turn into audacity or tragedy (e.g. the heroine lures the critters in to cook and eat them). Other times the usual formula plays out straight and the joke is that the writers have copied a scene without even pretending they didn't take it straight from Snow White and the Seven Dwarfs. (Even though gentle or pure characters attracting animals is Older Than They Think, Disney films are the most iconic examples for most viewers.) In shows with particularly high trope content, the woodland critters may not appear at all, leaving the heroine puzzled or annoyed by their absence.

Note that to fit this trope it has to be a clear reference to the classic Disney moment. If it's just a character who does horrible things to animals after seeming to befriend them, that's either a Subversion of Friend to All Living Things or a straight example of Enemy to All Living Things.