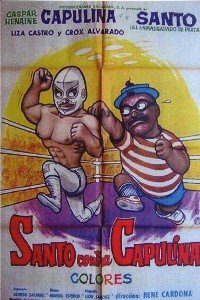 The Hero and The Wimp (guess who is who)
Santo versus Capulina is a 1968 movie featuring a team-up between two of Mexico's top movie stars of the time, masked wrestler El Santo and comedian Gaspar Henaine Pérez (Capulina). It's mainly a comedy, but contains a fair amount of action as well.

In this film, Capulina, a childlike fat man, works as a night watchman on a warehouse, tough he literally sleeps on the job. Unknown to him, the place is being used by a gang of criminals called Los Infernales to smuggle diamonds. However El Santo is working with the police on the case; this leads him to meet Capulina, who fanboys all over him, much to Santo's annoyance. Capulina spends most of the film trying to get the hero to visit the group of kids that he coaches.

Hilarity Ensues after two of the criminals become convinced that Capulina is El Santo after they see him wearing a replica of his luchador mask (never mind the difference in body shape). Additionally, their leader is forcing a scientist to create robot duplicates of people (including Capulina) to help him kill El Santo.