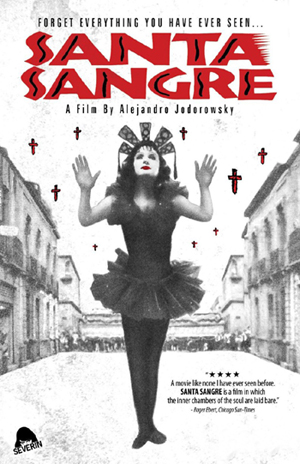 Santa Sangre (Holy Blood) is a 1989 film by Alejandro Jodorowsky, blending together elements of horror, surrealism, and romance. Considered by Roger Ebert to be among the Greatest Movies Ever.

Our protagonist is a young man named Fenix — once Fenix the Boy Magician, of the Circo del Gringo. His father, Orgo, runs the circus and is nominally a knife-thrower, although most of his time seems to be dedicated to drinking and abusing his family. His mother, Concha, is the queen of the flying trapeze as well as a devotee of the Santa Sangre Church, where she and her followers worship a girl whose arms were cut off by rapists. The arrival of a Tattooed Woman and her protégée, the deaf-mute Alma, sparks a chain of jealousy and lust that culminates in gruesome death, all of it witnessed by Fenix firsthand.

So deeply is Fenix traumatized by these events that by the time the film opens, he, now a young man, is confined to a mental institution. He doesn't speak; he doesn't eat normal food; and he seems entirely convinced that he's actually an eagle. One night, he and some of the other patients are taken out on a a field trip into the city. It's during this adventure that Fenix happens to see someone he hasn't seen in years — not since that last night at the circus. The sight of her shocks Fenix out of his stupor once more, and although his sanity is still in tatters, he finally has a purpose... even if that purpose is not entirely his own.