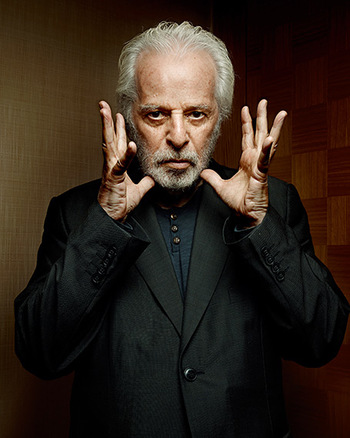 He is known for a distinctive mix of mysticism and brutality in his work, which stems from his own interest in mysticism and the occult (he has been involved with a number of mystical and spiritual disciplines including Zen Buddhism and Mexican shamanism as well as inventing his own spiritual system which he calls "psychomagic".) His comics and films are often peppered with symbols and elements from various occult forms, which are usually deliberately placed to reflect deeper meanings behind the works. This usually means Jodorowsky creations are painfully avant-garde and either inspired or totally batshit insane depending on who you ask. Compare David Lynch, only possibly even weirder.

During his film career (mainly in the '70s and '80s) he deliberately set out to create films which would have the same impact on a viewer as a dose of psychedelic drugs. Not content with tripping his audience out, he would often set up the film making process as a ritual magical act for himself as well. For example, he used his own real son as his on-screen son in El Topo, and really put the boy through the manhood ritual depicted in the film. He has also used psychedelic drugs during filming, and occasionally dosed actors before shooting.

His most famous films are:

Jodorowsky was originally slated to be the director for the film adaptation of Dune. His version would have been 14 hours long, and borne only a tangential resemblance to the book (it was going to be based on a dream he had which he later discovered was similar to the plot of the first novel). He had also contracted Salvador Dalí to play Emperor Shaddam Corrino IV (for a fee of $100,000 per minute of screentime) and Orson Welles (who only agreed to the film on the terms that his favorite chef prepare all his meals) as Baron Harkonnen, with Dark Side of the Moon-era Pink Floyd providing some of the soundtrack. As he had already spent nearly a third of the budget without shooting a thing, the producer decided to replace him. An interview features Jodorowsky and some of his collaborators talking about the plans for the film. A feature length documentary Jodorowsky's Dune also examines the subject.

Jodorowsky has also worked extensively as a writer for comics. He wrote a number of series set in his Space Opera "Jodoverse" as well as others. The Jodoverse contains a lot of ideas he had worked up for his version of Dune. Jodorowky's comics contain many of the same mystical, surreal and brutal elements as his films.

He's had four sons: actor Brontis (who worked with his father in several films and a stage play), Teo (died of overdose in 1995 at age 24, played a role in Santa Sangre), psychoshaman and actor Cristóbal (interpreter in Santa Sangre and the main character in Quantum Men) and Adan, the youngest, a musician known as "Adanowsky". He also has a daughter, Eugenia.