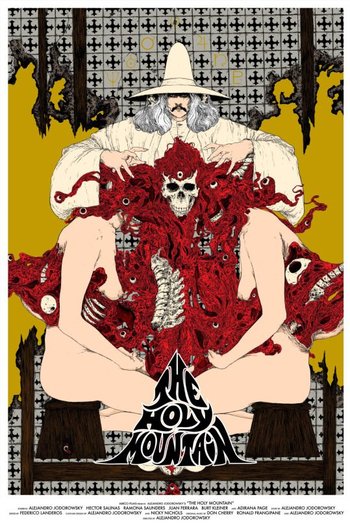 "ZOOM BACK, CAMERA!"
You know you cannot escape death, but immortality can be obtained. We must unite our forces to assault the Holy Mountain and rob its wise men of their secret of immortality.
—The Alchemist
Advertisement:

The film opens with a man dressed in black (The Alchemist) shaving two women in a rather psychedelically decorated room. The very next thing is a naked man (The Thief) lying in a pool of his own urine, covered by bees. This should tell the audience that, oh boy, they are in for something completely different. The plot is about The Thief, who is somewhat of a Jesus figure, and his dwarf companion who has no arms. They travel, meeting The Alchemist and seven other strange people, who are pursuing a mysterious goal that involves reaching the titular Holy Mountain.

The Holy Mountain is a parade of symbolism, be it meaningful or just there to confuse everyone. Coupled with the dream-like narrative and Jodorowsky's tendency to cram the scene full of whatever he wishes. The result is quite bizarre. The film is also either a spiritual or an outright actual sequel to El Topo, another trademark Jodorowsky film made three years earlier. The Holy Mountain was bankrolled by Allen Klein, manager for The Beatles, as John Lennon and George Harrison admired El Topo. The film was shot sequentially, entirely in Mexico.

The Holy Mountain has examples of: