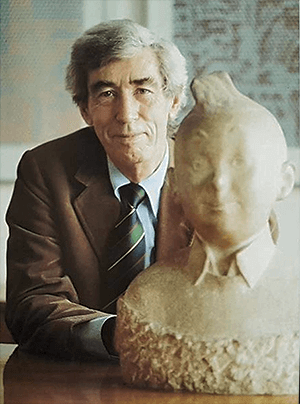 "By believing in his dreams, man turns them into reality."
Advertisement:

Georges Prosper Remi (22 May 1907 — 3 March 1983), better known by the Pen Name Hergé, was a Belgian comic strip cartoonist who became internationally famous as the creator of Tintin.

No other European comic artist has managed to reach such a worldwide audience, except maybe René Goscinny and Albert Uderzo (Asterix), Peyo (The Smurfs) and Morris (Lucky Luke). And in that regard only Asterix has reached a similar international success. Celebrity fans of his work include Steven Spielberg, Peter Jackson, Andy Warhol, Roy Lichtenstein, Harold Macmillan and even Charles de Gaulle, to name a few.

Works by him that have their own page on TV Tropes: