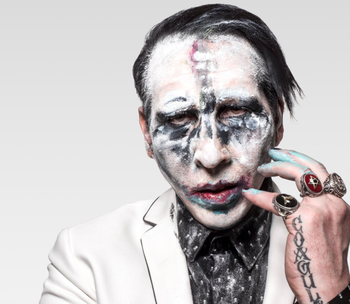 "I am the God of Fuck!"
— "Cake and Sodomy"
Advertisement:

Marilyn Manson (initially Marilyn Manson and the Spooky Kids) are an American rock band founded in 1989. Most of their early music technically falls under industrial rock with some metal elements (a metal style commonly referred to as Industrial Metal), but they've since decided to step foot in every rock subgenre from straight-up rock to Glam Rock.

The band are without a doubt best known from the image of them conjured by the public at the height of their infamy, namely deeming them "shock rockers" (a label they resent, as they felt they never were trying to be shocking, but just doing what they wanted), with their graphic imagery and ruthless attacks on the mainstream media winning them a reputation of the kind seldom seen before in music. In fact, the moral panic against them was so great that they were blamed for the Columbine massacre by sections of the media, under the belief that the killers had been inspired by their music (ironically, the killers hated them and saw them as sell-outs, but were KMFDM and Rammstein fans instead).

On the surface, this seems like an easy mistake to make. Throughout their career, Marilyn Manson have made good use of explicit live shows, controversial lyrics and outright bizarre music videos. The songs are cynical, with many lampooning conformism, social hierarchy and the media, amongst other things. Nothing was off limits, including certain members of the band's own fanbase. Despite this, in true industrial metal fashion, several of the songs and most of the videos don't give their meaning up easily, and are open to multiple interpretations.

Due to the fact that the band name is also the lead singer's stage name, Marilyn Manson is one of the most notorious examples of I Am the Band in existence. Many people are not, in fact, aware that they are a band and credit all the group's music to the singer alone. This has become more prominent over time, to the point where Marilyn Manson the person has become a household name, yet the other band members are known only by fans, ex-fans and (some) music critics.

The number of them doesn't help — Marilyn Manson's line up changes almost constantly, and they have gone through 17 guitarists, bassists, drummers and keyboardists in just 20 years. This has often been attributed by those who have worked with him to (among other things) Manson thinking, well, that he is the band and the others are just there to provide background scenery for him.

With the two latest albums however, it was defied, with Tyler Bates actually having quite a lot of power in the band alongside Manson, taking Twiggy's role as co-creator while Twiggy was busy marrying Laney Chantal and working on his own projects. In October 2017, Ramirez was fired after Jack Off Jill vocalist and Ramirez's ex-girlfriend Jessicka Addams publicly accused him of pervasive physical, emotional, and sexual abuse in their relationship. Manson himself would be accused of similar acts in 2021 leading to accusations of hypocrisy and him being dropped by his label, manager and talent agency and losing multiple television roles.

When all of your wishes are granted, many of your dreams will be destroyed.
Feedback

Marilyn Manson does a rendition of the hit Eurythmics song "Sweet Dreams (Are Made of This)".

Marilyn Manson does a rendition of the hit Eurythmics song "Sweet Dreams (Are Made of This)".