Music / Portrait of an American Family 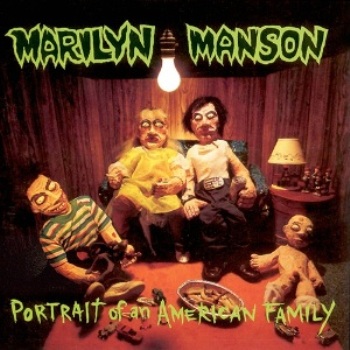 Cake and sodomy, anyone?
Advertisement:

Portrait of an American Family is the debut album of American rock band Marilyn Manson, released in 1994 by Nothing and Interscope Records.

The album originated under the name The Manson Family Album in 1993, but due to dissatisfaction with its overly polished sound, the band reproduced and remixed the album with assistance from producers including Trent Reznor of Nine Inch Nails, who had signed the band to his Nothing label. Parts of the album were made at Reznor's home studio at 10050 Cielo Drive, where members of the Charles Manson family committed the 1969 Tate murders. (Reznor would famously later use this studio to create the NIN album The Downward Spiral.)

The album introduced the nightmarish tones and biting critique of modern American culture/media that would become the central ethos of the band, and contains a wide array of cultural references from lyrical Shout-Outs to a copious amount of samples (many of them from offbeat films). It also caused a bit of Executive Meddling due to the inclusion of references to Charles Manson and its controversial artwork.

The album was released to modest success, but has gotten warmer reception over the years, being deemed by Rolling Stone as one of the greatest heavy metal albums of all time.

The album is known for its singles "Get Your Gunn", "Lunchbox", and "Dope Hat".