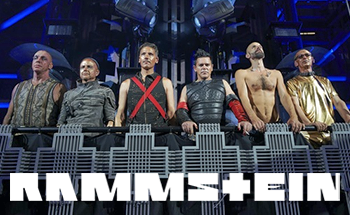 Rammstein is a six-man Industrial Metal band from Germany. They were formed in 1994 after East German escapee Richard Z. Kruspe wanted to make music that mixed musical grooves with a machine-like sound, which they'd later describe as "Tanz-Metall"note dance metal, and gathered the rest of the group to bring it about. They take their name from the Ramstein US Air Force Base where an airshow ended in disaster when three planes collided mid-air in 1988, adding an extra 'm' by mistake, though the band insists they took the name for a kind of battering ram once they got popular. Their stateside popularity began in 1997, when a couple of their songs were featured in David Lynch's Lost Highway, and the song "Du Hast" became a smash hit.

The band is notable for their absolutely absurd and spectacle-driven live shows that feature impressive pyrotechnic displays and plenty of Audience Participation Songs, to the point where Till lets the crowd sing some songs in their entirety.

The band has also helped name the following tropes:

We're All Troping In Amerika:

Snow White shoots up gold from the dwarve's mine like heroin.

Example of:
I Can't Believe It's Not Heroin!

Snow White shoots up gold from the dwarve's mine like heroin.