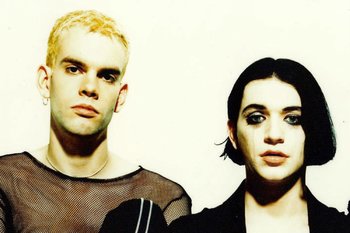 Left - Stefan Olsdal. Right - Brian Molko.
"A friend in need's a friend indeed,
A friend with weed is better,
A friend with breasts and all the rest,
A friend who's dressed in leather."
"Pure Morning"
Advertisement:

Placebo are an Alternative Rock band formed in London in 1994, currently made up of Scottish-American Brian Molko on guitar/vocals and Swedish Stefan Olsdal on bass. Molko remarked on one occasion that the name of the band was, as opposed to its English meaning, a Latin word for "I will please."

Brian and Stefan attended the same high school but didn't meet formally until 1994, when they met in a tube station in London. Noticing Stefan had a guitar strapped to his back, Brian invited him to come see his own local gig. Stefan loved his performance so much that they wound up collaborating on the band Ashtray Heart, which quickly became Placebo. Originally, they had Robert Schultzberg (an old school friend of Stefan's) behind the kit, but after recording the self-titled debut with him, the disagreements soon became so intense that (after some false starts) they soon cut ties with him and settled on Steven Hewitt. With him, they recorded perhaps their most famous album, Without You I'm Nothing. The album contained their only top 20 single in America, "Pure Morning."

Their style began as a glam-influenced alternative rock style full of raw guitar riffs, but, starting with 2000s Black Market Music, they began to experiment more with synthesizers and new instruments. Much of their notoriety also stems from the androgynous appearance of Molko, alternative rock's reigning king of Viewer Gender Confusion. While the band never really hit the big time in the Western world, they've developed a huge cult following, particularly in the LGBTQ community.

After the tour for Meds proved to be dysfunctional for the band, Molko and Olsdal split with Steve Hewitt and replaced him with Steve Forrest. Forrest played with Brian and Stefan during the Battle For The Sun and Loud Like Love tours. With the departure of Forrest, Colour Of Fire alumni Matt Lunn took over drum duties for 2015, but in the end, Molko and Olsdal decided that they would be the only official members of the band, preferring to work with touring drummers.

Tropes used by this band include: