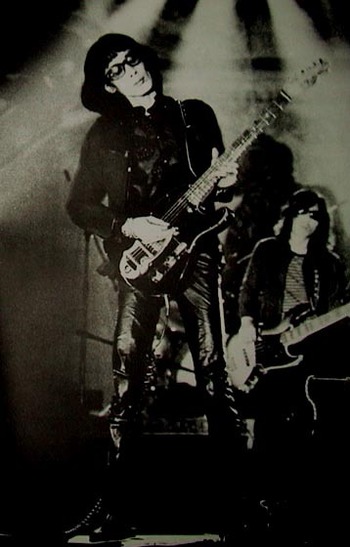 A picture of Les Rallizes Dénudés from an unknown concert
Advertisement:

One of the very first Noise Rock bands, Les Rallizes Dénudés (Japanese: 裸のラリーズ or Hadaka no Rallizes) were a Japanese band that existed from 1962 to 1996 that predated Western popularization of the genre by around a decade. And despite being one of the most influential and important bands in the Japanese music scene, almost nothing is known about them - in fact, they technically never officially released anything until 2022, long after they had ceased to exist.

It is near impossible to tell where the facts end and stories begin when it comes to their history. Allegedly, guitarist, vocalist, and only consistent member Takashi Mizutani started an avant-garde theatre troupe before abandoning that in favor of a rock band inspired by The Velvet Underground's White Light/White Heat and Free Jazz in 1967. Most of their output in the late 60s is very different from what would eventually get them an international cult following, though some songs still showcase their feedback laden style - the Psychedelic Rock and Progressive Rock influences shown early on are present throughout their career. Their early playing with The Taj-Mahal Travellers also influenced their music.

Mizutani became a Reclusive Artist mostly because of an infamous incident in which bassist Moriaki Wakabayashi hijacked an airplane in support of the Japanese Red Army. Mizutani, a long time sympathizer and participant in far-left student riots, feared arrest or worse if he showed his face too much. One proposed reason for the dissolution of the band is due to legal complications involving Mizutani, though his efforts to keep everything relating to himself and the band a secret have made finding any one cause rather difficult. Another mystery of the band is their name - "Rallizes" is not a word in Japanese or French. There are multiple theories as to what they were going for with it, ranging from "Fucked Up and Naked" to "The Empty Comrades".

Sometime in The '70s, their music evolved into long, drawn out songs that have been described as Lou Reed's Metal Machine Music set to a Krautrock inspired rhythm section. The ear bursting feedback on top of Mizutani's guitar riffs rubbed off on some of his contemporaries, such as Keiji Haino of Fushitsusha.

They continued to play on and off throughout the 80s and 90s before eventually dissolving in 1996. The last time Mizutani was spotted was during a show in 1997, in which he played alongside Free Jazz musicians Arthur Doyle and Sabu Toyozumi. He allegedly approved the release of a remastered boxset in 2011, but that's about it for him. In fact, it wasn't even revealed until 2021 that he'd passed away in 2019.

Had they never formed, countless more popular Japanese artists may have never existed: Merzbow, Boris, Boredoms, and Keiji Haino have all been impacted by their influence.

In 2022, the first official Les Rallizes Dénudés album finally appeared: The OZ Tapes, consisting of recordings the band made in The '70s. It is available from their Bandcamp

Notable Bootlegs: note dates are marked as when the bootleg was released, as the dates provided by them are often inaccurate, and many bootlegs also pull songs from other concerts to fill space

Tropes that apply to Les Rallizes Dénudés are: