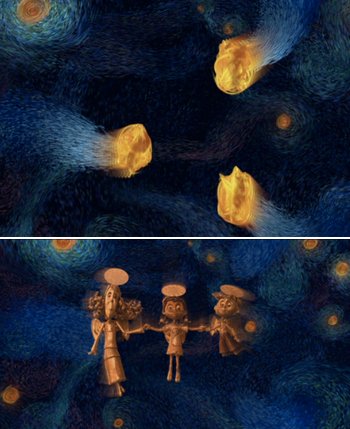 Post-impressionist Heaven.
"He was trash but now he is eternal, like the stars in the sky...Ah my partner!"
— Biker Xavier, Pokémon Black and White
Advertisement:

For thousands of years, man has gazed at the stars and wondered what they are. He made up stories and legends about them. One of those stories was that stars were souls or spirits, watching down upon the Earth.

This probably has its origins in modern stories in two sources. The first is Greek Mythology, in which many of the constellations were heroes placed there by the gods for their heroic deeds. The second is Plato's Cosmology, which asserted that every soul has a companion star that it returns to upon death, so long as it lived a just life.

Another common interpretation inverts the original assumption, and instead holds that each star represents a living soul. When a new child is born a new star will appear in the sky and, when the star's associated person dies, it disappears. Some versions blend these two takes by having the star that appears to mark a person's death be, specifically, a falling star than soon vanishes over the horizon.

This is Older Than Feudalism. This trope exists because of the logic of its Super-Trope, Heaven Above, where anything skyward is associated with everything divine. Related to Ascend to a Higher Plane of Existence and Died Happily Ever After. For cases where someone becomes a constellation or a specific star, see Stellification. Compare to Winds Are Ghosts for another natural phenomenon associated with deceased spirits.