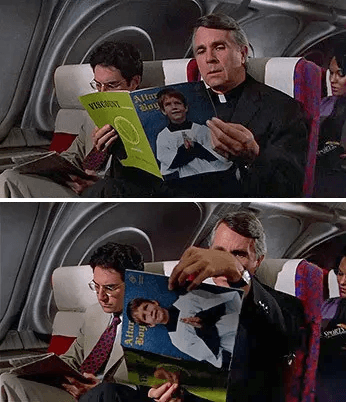 Hey preacher, leave those kids alone!
"Deep in prayer, my cross to bear
I kneel upon the floor
Temptations of a Catholic priest
Aren't easy to ignore
But I cannot control myself
He rips my soul apart
For one small sheep among my flock
Has stolen the shepherd's heart"
— Stephen Lynch, "Priest"
Advertisement:

Very simply, this is when a priest is depicted as or accused of being a pedophile or child molester — in short, a holy man with an entirely unholy interest in children.

Given the implicit trust associated with the profession, this is typically portrayed as the ultimate betrayal of innocence and a Moral Event Horizon for everyone involved. Due to the cultural impact of the late-twentieth to early 21st-century child molestation scandals in the Catholic Church, Catholic priests are by far the most likely to be involved in a molestation accusation in modern media, although neither Protestant ministers nor the clergy of other religions are by any means immune, and, of course, in real life a pedophile also can be a parent or other relative, a teacher or caregiver,

a babysitter, a neighbor, a family friend, or even a random person online,note although for this to happen, a meeting must be arranged first, and personal information given that any parent worth his/her salt teaches their children to never give to strangers, making the terrible internet Death Trap not nearly as much of one as those who fear it believe simply because — as with murderers, rapists, muggers, or any other type of violent criminal — pedophiles exist in all professions and at all levels of society. Some studies have argued that Catholic priests are no more likely to be pedophiles than any other person.

The main reason why abuse cases in the Catholic Churches drew far more media attention than, for example, cases in schools was because the Catholic Church cases were systematically covered up. This cover-up was exacerbated because, when clergy abuse accusations started to become more common in the mid-to-late 20th Century, it was believed pederasty could be cured with therapy, which is where offending priests were sent (instead of informing the authorities).

Depending on the tone of the work and whether it regards the church as inherently good or evil, the initial accusation may be treated as the aberration of a single sick individual, or may lead to the uncovering of a corrupt or actively malevolent church hierarchy. Taken to the extreme, the church is nothing more than a Wretched Hive of child abusers using their religion as a shield. By contrast, in a comedic work, the trope may be Played for Laughs as a stock joke without exploring the Unfortunate Implications.

The accused need not even be guilty; the simple accusation of pedophilia/molestation is usually enough to set off a Pædo Hunt, which a villain may take full advantage of as a Red Herring to cover up or distract from their crimes (or to justify a crusade against the priest's entire religion). Another way this trope can be used on a non-villainous character is that he has joined the church not only to get an excuse to remain a bachelor but also as a way to fight against his urges and remain chaste.note It's been speculated that this is also a major reason in real life for the seemingly-disproportionate number of pedophiles in the priesthood, though there are also clear cases of pedophiles becoming priests specifically to be in a position of power that has access to young children.

Needless to say, the subject is extremely controversial in Real Life. Therefore, No Real Life Examples, Please! Just let The Other Wiki provide the facts.

The priest chases children in the LEGO show then comes into the house and chases Stewie.

The priest chases children in the LEGO show then comes into the house and chases Stewie.