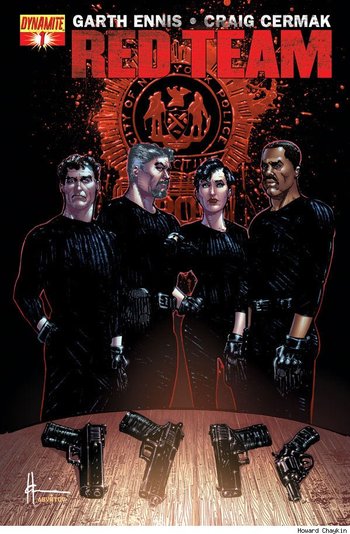 An seven-issue comic book from Dynamite Entertainment, written by Garth Ennis with art by Craig Cermak and covers by Howard Chaykin, Red Team is a crime story set in and around New York City.

A major crimes unit within the NYPD, Red Team, has been pursuing a particularly ruthless drug dealer, Clinton Days, for years, and inadvertently eliminated most of his competitors in doing so. When the dealer in question arranges for the death of a fellow cop and subsequently has the man who pulled the trigger assassinated, leaving them with nothing to go on, the Red Team proceeds to step outside the law.

The original series was followed up with a sequel in 2016, Double Tap, Center Mass, which ran from August 2016 to May 2017. The survivors of the first series have been busted down to street-level patrol duty, but by complete accident, stumble across a particularly high-profile case that might be enough to get them back to where they want to be.