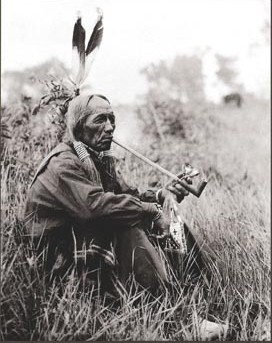 A popular image in many westerns: After a large battle or conflict between the white settlers and the Native Americans, the tribes will make peace by organizing a "pow-wow" and smoke the peace pipe with them. Almost without exception, somebody (usually a white man) will start coughing or feel sick after taking a puff from the peace pipe. The others will laugh at him.
Advertisement:

Somewhat a subtrope of a Distinguished Gentleman's Pipe, Protocol Peril and one of the few examples where Smoking Is Cool in the sense that it "cools" everybody off. Historically Truth in Television, as many Native Americans shared this custom.