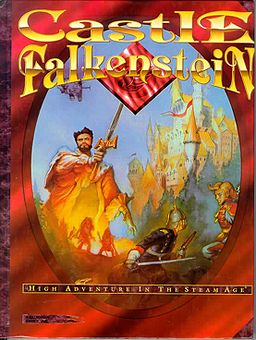 Castle Falkenstein is a Gaslamp Fantasy tabletop RPG published in 1994 by R. Talsorian Games. A handful of supplements followed, and a GURPS adaptation of the setting was published in 2000. Fat Goblin Games acquired the license to put out additional supplements in 2016, but it reverted to R. Talisorian after a few years. R. Talsorian announced a 25th-anniversary edition in 2018 for release in 2019, though as of yet nothing has appeared.

The story is an alternate universe set during the Victorian era, mostly in Europe — or as it's called in this universe, New Europa. Many fixtures of period fiction, high fantasy, and real history are all present, including high society intrigue, wars between European powers, and the shadowy presence of magicians and faeries.

Rather than being a straight setting for the 19th century era like Victoriana, Castle Falkenstein defines itself with the slogan of "the Victorian Era as it Should Have Been", in which gallant men and women fight the forces of evil, steam-powered contraptions fill the skies and faeries are a regular sight in the cities of Europe. While calling itself a Steampunk setting, the books constantly imply and point out that many of the technologies are thanks to subtle (and unconscious) manipulation of sorcery, making it a straight Gaslamp Fantasy with a heavy dose of Two-Fisted Tales and Dungeon Punk for good measure.

The corebook itself is a whimsical mix of illustrated novel, world book, and game; most of it is glossy, coloured, illustrated and completely avoids mentioning any rules, while telling the story of Tom Olam, a game designer plucked magically from Earth to help in the ongoing fight against the Unseelie and their human collaborator, Otto von Bismarck; occasional stops are made for more in-depth exposition about life in New Europa.

The final chapter details the rules; true to form, they're designed to be played in the context of Victorian-era aristocratic life. Therefore, action resolution is through playing cards (which are a wholesome pastime), not dice (which are for uncouth knaves), while characters are detailed using diaries, because Xerox machines for character sheets weren't available in the 1870's (Charles Babbage, however, invented data forms in the 1830s... so some kind of datasheet wasn't entirely out of timeframe).

(Not to be confused with Falken's Maze.)