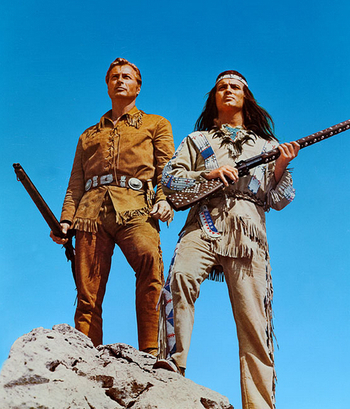 Most noble Heterosexual Life-Partners
"That was Winnetou, the Apache chief, the most glorious of Indians. His name lived in every log cabin and at every campfire. Just, sagacious, true, brave to to point of audacity, guileless, a friend and protector of all who needed aid, be they red or white of hue, so he was known throughout the length and breadth of the United States and beyond their borders."
— Der Sohn des Bärenjägers
Advertisement:

Winnetou is one of the best-known novels written by the German author Karl May. His heroes Old Shatterhand and Winnetou are very famous literary characters in Europe and quintessential examples of Ideal Hero and Heterosexual Life-Partners. Although May only traveled to America himself after his novels became successful, the novels are famed for their accuracy in geographic terms. All trips and journeys of the main character can be followed in an atlas. Accuracy of many other things is not to be taken for granted.

The character who is here called "Charlie" or "Old Shatterhand" previously featured in May's Orient Cycle, in which he adventured in the Middle East under the name of "Kara Ben Nemsi".

Several of the novels have film adaptations made in Germany in the sixties. The Treasure of Silver Lake was the first film of the series; it proved successful enough and spawned a film series. The movies were parodied in Der Schuh des Manitu.

The movies of this series:

Many of the later films were co-produced in Italy and co-starred Italian actors. The success of the Kraut Western is often seen as a midwife to the birth of the Spaghetti Westerns. It also provided the spark that made the East German DEFA decide to produce a series of ideologically more correct Indianerfilme ("Indian movies") of its own. All of these starred Gojko Mitic in the lead, a Yugoslavian actor whose first part in a Western had been chief Wokadeh in Unter Geiern.

RTL made a remake for the 2016 Christmas season as a direct-to-TV movie.

The novels the films were based on are in the public domain, and you can read the German originals here

The Winnetou novels and film series provide examples of: