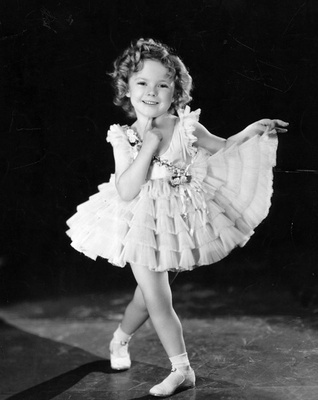 Shirley Temple Black (born Shirley Jane Temple; April 23, 1928 – February 10, 2014) was one of the most famous child actors in film history. During The Golden Age of Hollywood, she was the top box-office draw for four straight years (1935–38), a record no other child star has come close to challenging.

While Temple was very popular during the desperate times of The Great Depression, her brand of sugary goop is likely to cause diabetic overload for viewers today. Her specialty: tap-dancing orphans who strike it rich. (Rarely do her characters' parents actually die onscreen as in Bright Eyes, which is ironically one of her darker films despite introducing her iconic song "On the Good Ship Lollipop".) Expect a suave man about town, a lemon-faced aunt, and a cool teacher to also make an appearance in one of her films. So successful was the formula that 20th Century Fox changed the title character of Rudyard Kipling's Wee Willie Winkie to a girl just so they could cast her in the lead for their film adaptation.

A triple threat at age ten, Temple was most often paired with Bill "Bojangles" Robinson, one of the few times that a black male actor got a free pass during the days of The Hays Code (which didn't allow interracial pairings). You'd be hard-pressed to find a more winning picture of Values Dissonance than these two. Temple and Robinson became close friends and were considered something of a Dream Team in their day, yet the on-screen relationship was clearly not an equal one. Poor Shirley also had a memorable blackface scene in The Littlest Rebel, a film which manages to out-cringe even Al "My Mammy in Alabammy" Jolson's The Jazz Singer for its offensiveness to modern sensibilities. 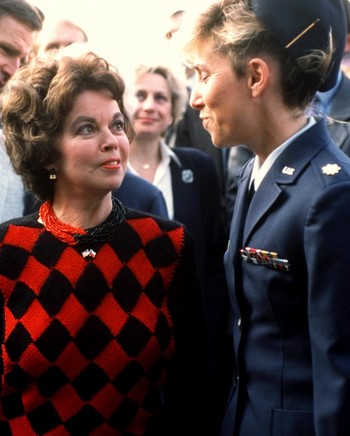 Temple's career trailed off as she approached adulthood, partly because she wasn't offered any good roles, and possibly because audiences weren't too comfortable with Shirley "Dimples" Temple being replaced with a very foxy young lady. She retired from show business in 1949 at age 21. However, from 1958 to 1961, she was the host and narrator for an NBC children's anthology of fairy tales called Shirley Temple's Storybook, and would occasionally play parts in episodes. Her children also played parts in some episodes. Her daughter Lori later became a bassist for Melvins.

In later years, she talked about the child abuse that occurred on the set of the Baby Burlesk short films: misbehaving children would be locked in a cupboard with a big block of ice, and left to freeze. When she was 12 (and considered for the part of Dorothy in The Wizard of Oz), an MGM producer exposed himself to her in his office; not knowing what was going on, she just laughed. When she told her mother about the incident, it was decided that 20th wouldn't loan her to MGM and the role went to Judy Garland.

After leaving the stage, Temple entered politics, serving terms as chief of protocol and the U.S. Ambassador to both Ghana and Czechoslovakia. In 1988, she released her autobiography, Child Star: An Autobiography.

She became Shirley Temple Black in 1950 when she married businessman Charles Alden Black. They remained married until he died in 2005.

Temple died at the age of eighty-five in February 2014 as a result of chronic obstructive pulmonary disease (COPD) from a lifetime of smoking. She was among the last of the stars from The Golden Age of Hollywood to pass on.

Temple lent her name to a popular non-alcoholic cocktail made with ginger alenote or lemon-lime soda or lemonade or orange juice or any combination thereof and a splash of grenadine syrup to give it the characteristic pink color, garnished with a maraschino cherry and sometimes oranges or other citrus fruits. The drink was traditionally held to have been invented for the express purpose of being served to her during her peak years (i.e. when she was a minor). Ironically, even though this drink is popular with children, Shirley Temple hated it for its "saccharine sweet, icky" taste, and additionally in her adult years for being endlessly served the thing by bartenders the world over (That said, the drink named after her having the exact same qualities as her movies seems especially appropriate.)

For her achievements in acting and as an ambassador, Google honoured her with an animated doodle

For some reason, any character based on her is nearly always a Spoiled Brat despite Shirley not really being prone to misbehaving in films or real life. Her mother wanted her to be cast in bratty or snarky roles, but the closest she ever got was Mytyl in The Blue Bird. She was, however, chided by her mother for being "brattish" in 1938 when she hit Eleanor Roosevelt in the rear with a slingshot. Her own preference would have been Action Girl roles.

Be careful not to confuse her with Darla Hood.

Shirley Temple films listed on this wiki include: