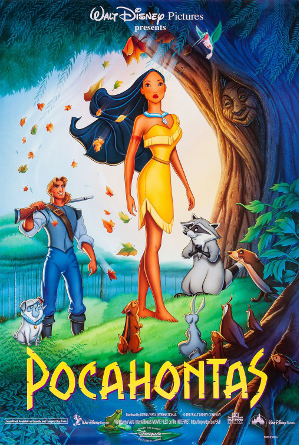 There's something in the wind...
"Can you paint with all the colors of the wind?"
Advertisement:

Pocahontas (released June 23, 1995) is the 33rd entry in the Disney Animated Canon. It is loosely inspired by true events, specifically by John Smith's rewrite of Pocahontas' life. It takes the old legend of the First Nations girl who supposedly saved the life of Englishman John Smith and turns it into a musical with few roots in the historical record, giving Pocahontas a significant Age Lift as well as romantic interest in John Smith. It literally has more roots in fantasy, in fact — a supporting character is a talking willow tree.

The film centers around Pocahontas, who has been promised to the best warrior of the tribe by her father, Chief Powhatan (the chieftain of the Powhatan Tribe), but she senses she has a greater purpose in life than this. When English settlers arrive to form the Jamestown colony, she meets the idealistic John Smith, the one member of the group who is interested more in adventure and the beauty of the land than the gold said to lie in it, which Governor Ratcliffe exhorts the others to dig up. Each an outcast among his/her own people, they fall in love.

But both groups are intensely mistrustful of the other — the Powhatans fear the English will ravage their land and people; the English regard themselves superior to the "savage" natives. When a rendezvous between the lovers leads to the death of her intended at the hands of a settler, John Smith is captured and sentenced to die, and (utterly convinced that the natives hide the gold) Ratcliffe intends to use this as the perfect excuse to exterminate the Powhatan people. Only Pocahontas can save both worlds.

A Direct to Video sequel, Pocahontas II: Journey to a New World, was released in 1998. It applied similar fictionalization to Pocahontas' later life, namely her journey to England and marriage to John Rolfe.

If you're looking for the Real Life Pocahontas, check her Useful Notes page here.