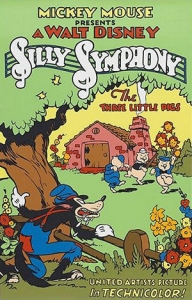 The Three Little Pigs is a landmark animated short film released on May 27, 1933. It was produced by Walt Disney (though distributed through United Artists). Based on the fairy tale of the same name, Three Little Pigs won the 1934 Academy Award for Best Short Subject: Cartoons. In addition to critical acclaim, the cartoon was a smash hit, so much that it was still running in theaters months after its debut, and became Disney's biggest financial success. To this day, it remains the single-most successful animated short ever made.

Animator Chuck Jones said, "That was the first time that anybody ever brought characters to life [in an animated cartoon]. They were three characters who looked alike and acted differently". The film is also notable for being the first animated short to be musically scored like a feature, rather than the standard cartoon scores of the time, which tended to be stitched together from staple songs.

A few follow up shorts were made in the following years, but none of them ever matched the original in popularity. The characters also made appearances in other Disney media, including many comic books.

In 2007, The Three Little Pigs was selected for preservation in the United States National Film Registry by the Library of Congress as being "culturally, historically, or aesthetically significant".

Has no relation to the 1995 feature length animated musical adaptation, The 3 Little Pigs: The Movie.

Example of:
The Big Bad Wolf