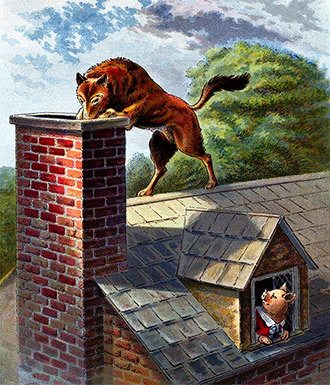 Then he ducked down the chimney, a bit absurd,
but if Mario could do it, then so could the Nerd.
— Narrator, The Angry Video Game Nerd
Advertisement:

Sometimes, characters like to make a dramatic entrance, and the front door can be seen as rather boring and ordinary. Or it's because the front door is locked and there seems to be no other way in. Whatever the reason, the decision is made to climb onto the roof and come down the chimney.

This method of entering can be played for different moods:

Can lead to being Stuck in a Chimney.

Compare Air-Vent Passageway. Contrast Smokestack Drop, where a character falls down a chimney. See also Santa Claus, because his preference for this method of entry is, of course, a firmly established fact.

Blowing up the chimney

Blowing up the chimney