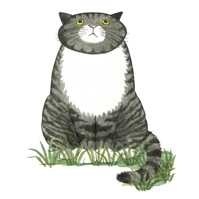 Meow!
Once upon a time, there was a cat called Mog, who lived with a family called Thomas. Mog was nice, but not very clever. She didn't understand a lot of things. A lot of other things, she forgot. She was a very forgetful cat.
—Opening to "Mog the Forgetful Cat".
Mog is a series of children's books by the British author Judith Kerr.
Advertisement:

The books focus on a cat named Mog who lives with a family called the Thomases, who consist of a mother, father and two children: Debbie and Nicky. Mog is a bit fearful and can be a bit gloomy when sad, but she is a very happy-go-lucky cat. She is also a bit forgetful, leading her into tricky situations. Mr (and to a lesser extent, Mrs) Thomas sometimes blame her for these mishaps and refer to her as "that cat", but the children (especially Debbie) are quick to spring to Mog's defense. Debbie seems to be the one who's most close to Mog, and Mog even has the unexplained ability to locate Debbie with her mind. Another quirk Mog has is she likes eggs and has one every day for breakfast.

Mog was based off the author's own cat, who was also called Mog.

The series started with "Mog the Forgetful Cat" and despite apparently dying in "Goodbye, Mog", there were two subsequent books, "Mog's Christmas Calamity" (a charity book tying in to a Sainsbury's ad campaign) and Mog's Birthday (published after Kerr's own death). When asked about this during the publicity for "Mog's Christmas Calamity", Kerr simply said the books were in Anachronic Order.