Literature / The Monster at the End of This Book 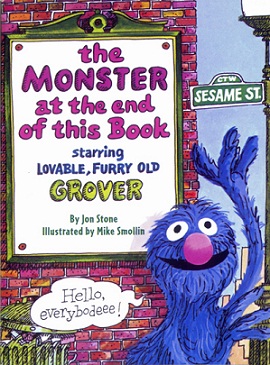 There is a Monster at the bottom of this TV Tropes page.

Grover: AHHH! Do not read this page, there is a scary monster at the end!

The Monster at the End of this Book is a classic 1971 Sesame Street picture book written by Jon Stone and illustrated by Mike Smollin. It consists entirely of Grover pleading with the reader, more and more desperately, to stop reading the book — because he's read the title page and is afraid to meet the monster.

In 1996, a sequel was published, titled Another Monster at the End of This Book, in which Grover is joined by Elmo. There, Grover again attempts to stop the reader from making it to the end of the book, while Elmo encourages the reader to continue reading. This has also been made into an app.

In 2020, an animated special based on the book, The Monster at the End of This Story, aired on HBO Max on October 29, available to stream on PBS Kids from March 7, 2022.

, and the sequel can be read here

See We Are in a Book! (an entry in the Elephant & Piggie series) for another children's book with a similar narrative concept.

Example of:
Song of Courage

Alternative Title(s): The Monster At The End Of This Story